On 8/28/2018, had the pleasure of being interviewed by A Martinez for KPCC’s Take Two about how Southern California can adapt to sea level rise and the expected impacts.

My article, Visualizing Water Infrastructure with Sankey Maps: a Case Study of Mapping the Los Angeles Aqueduct, California, was just published in Journal of Maps!!! In it, I dive deep into the theory and practices behind the signature Sankey map of the Aqueduct Futures exhibit with a peer reviewed research article.  You can read the full article (it’s open-access thanks to the College of Environmental Design) at DOI: 10.1080/17445647.2018.1473815. 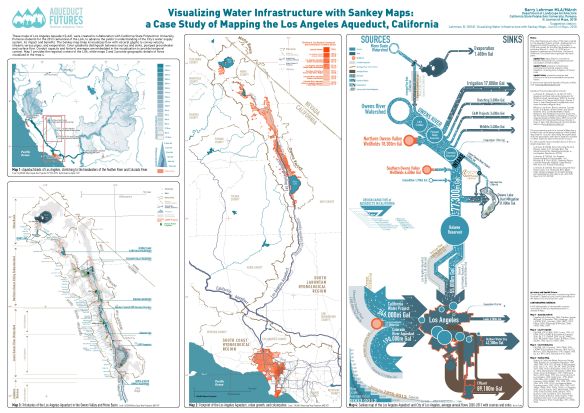 If you want to learn more about flow maps after reading my article, check out my post sharing many of the precedents mentioned.

Had the pleasure of being the final speaker in CPPLA’s spring 2018 lecture series with a talk titled “Landscape Futures” that covered my recent scholarship visualizing the interface between infrastructure, ecology, and culture.

The rest of my slides are below.

END_OF_DOCUMENT_TOKEN_TO_BE_REPLACED

Since 2013, I’ve acquired and deployed a range of environmental sensors. My initial plans for the data were to define baseline environmental (which ended up being beyond my means). Finally figured out how to merge my inner Maker with my infrastructural fascination by using environmental data streams in interactive design elements that poetically reveal hidden flows and changes or creates immersive experiences.

This concept – researching how revealing environmental conditions and technological flows along infrastructural pipes and wire in situ can generate awareness to inspire behavior change with public, combines several of my research interests and is the focus of my fall 2017 sabbatical project .

So what sensors and data loggers do I have?

First online in 2013, my Onset HOBO U30 data logger is configured to collect ETo data (1@air temp/humidity, 2@ ground temp, 2@soil moisture, 1@net radiation, 1@wind speed, just missing a rain gauge) on my patio. This entry-level research-grade suite of sensors and the data logger cost about $3,000, and serves as my reference to calibrate the other sensors as needed. The U30 has the ability to control two relays and to send an alarm signal that can trigger other microcontrollers. But Onset has created a proprietary ecosystem with limited customization possible (and haven’t found anybody trying to hack them yet).

About the size of a deck of cards, the Stalker v2.3, an ATmega328P Arduino compatible wireless sensor node packaged with a 0.5 watt PV panel and LiPo battery, supporting a range of sensors and networking options. This was the microcontroller used by the students in my LA301L studio in 2014, so I now have 5 of them, a ZigBee (XBee) wireless mesh networking shield (a low energy version of wifi, that I haven’t gotten to work), a Bee GPS card, two Grove Dust Sensors, a 8×8 LED matrix, a 10 LED bar, and several other sensors. 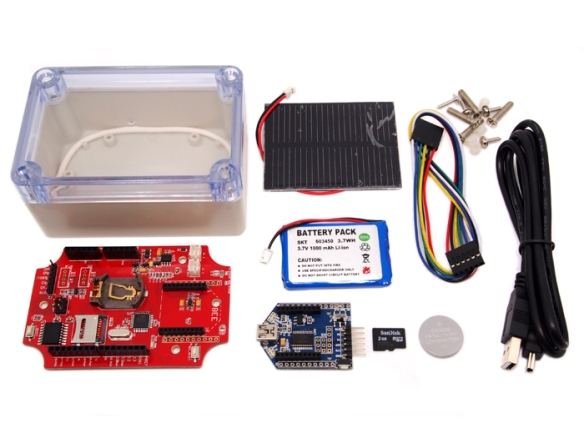 I got on board the kickstart campaign for a Smart Citizen Kit and ran into some difficulties deploying it. Instead of real-time streaming data via wifi to www.smartcitizen.me, it has been sitting in a box since I ripped the USB jack off the board (the 3D printed enclosure is too small!). This was after I used the wrong settings while configuring it and lost the ability to communicate to it via USB, which Acrobotic kindly fixed by reburning the bootloader.

For 2017’s sabbatical project, I’m getting a $30 Teensy 3.6, an Arduino compatible development board featuring a much faster processor (32-bit 180 MHz ARM Cortex-M4 processor) and loaded with 256kb RAM plus all sorts of goodies (specs). It is powerful enough to drive thousands of LED pixels (or hundreds of animation frames), yet only 2.5 inches long!

I’ve also been eying getting 2 or more Feather M0 with RFM95 LoRa Radio – 900MHz if I need wireless networking abilities – as the LoRA protocol is supposed to be simpler to implement then ZigBee and they have a much longer range.

Earlier sea level models were static state, so didn’t factor in the significant contribution of waves to coastal flooding, above and beyond the levels observed by the tidal gauges. Interesting to note that the predicted sea levels are higher than the current tsunami risk zone delineation. 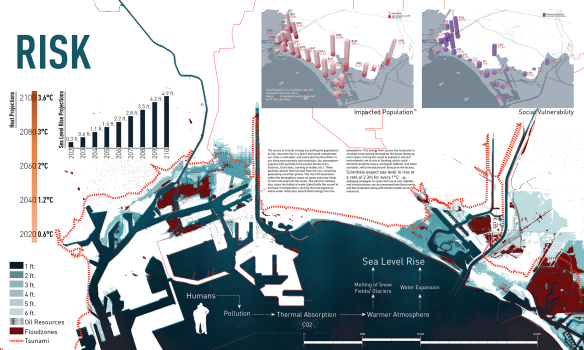 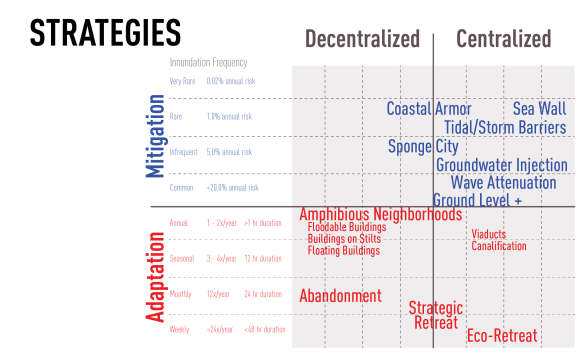 Centralized: defined by top-down policies or regulations, neighborhood or community-wide deployment, and reliance on public funding to implement.

Decentralized: implementable by individual property owners and occupants to protect a single building, parcel, or block. These strategies and tactics may require changes to the zoning or building code, and/or innovative construction approaches.

Together with the mitigation and adaptation strategies and tactics (below), the matrix of Decentralized/Centralized and Mitigation/Adaptation is abbreviated as “DCxMA”. END_OF_DOCUMENT_TOKEN_TO_BE_REPLACED

Excited to share that AHBE Landscape Architects is sponsoring my winter 2017 402L studio! This 4th year BSLA topic studio will develop strategies and tactics for the waterfront of Long Beach and communities along the Lower Los Angeles River to adapt to rising sea levels, urban flooding, and tsunamis. From tactics to schematics, projects will develop site-specific soft infrastructure typologies suitable for wide-scale deployment around Southern California to sustain our ports and vibrant waterfronts. 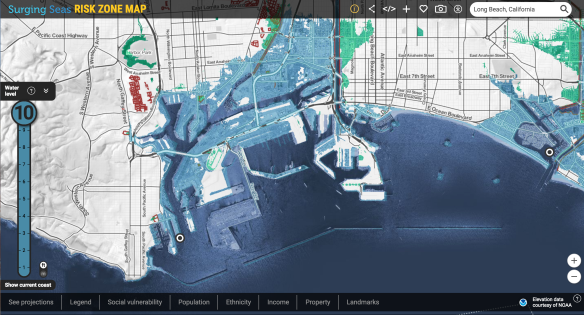 Screen shot from Climatecentral.org showing the inundation from just a 10 foot rise in sea level.

Our field investigations will take us to Long Beach and out onto San Pedro Bay to explore the interface between water and land (the bravely curious students may need to take Dramamine).

Infrascape readers will be able to follow the students’ progress via their blog posts to  http://ahbelab.com.

Honored to be able to contribute several illustrations to the 2016 Land Art Generator Initiative book and excited to share them on my blog. 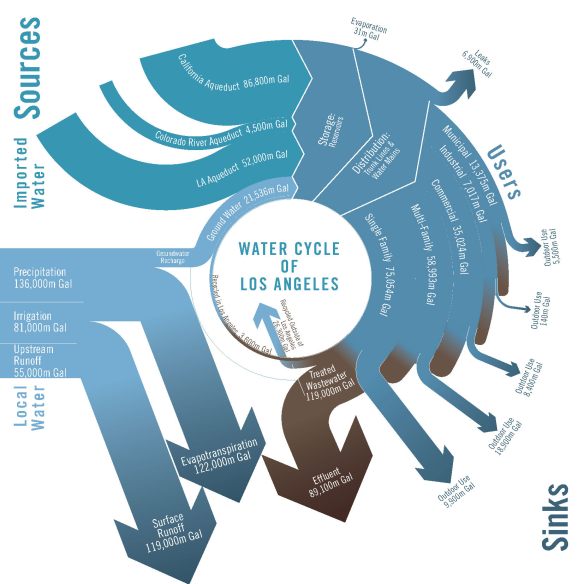 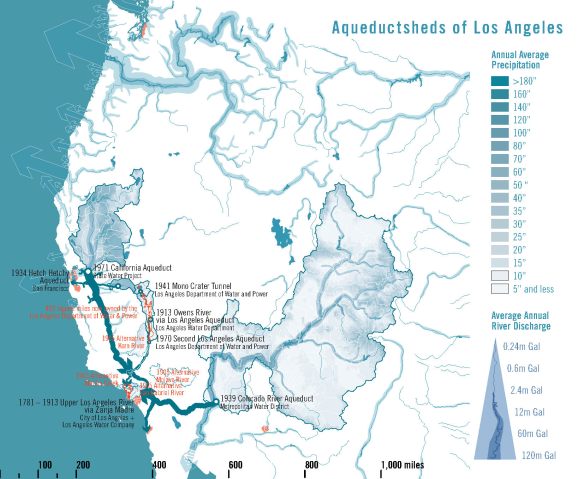 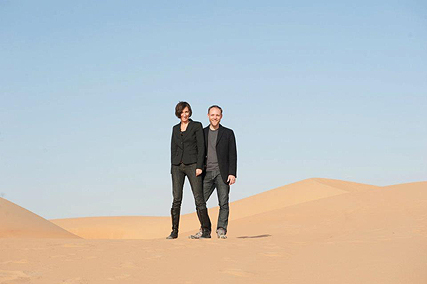 Excited to share that artist Elizabeth Monoian & architect Robert Ferry, co-founders of Land Art Generator Initiative (LAGI) are giving a public lecture at 5pm in the atrium of Building 7 on Friday 2/19 at Cal Poly Pomona.

Prior to the lecture, they will be guests in my LA302L & LA402L studios that are designing entries for the 2016 LAGI competition (entry deadline is May 15th), set adjacent to the Santa Monica Pier.

LAGI 2016 is an ideas competition to design a site-specific public artwork that, in addition to its conceptual beauty, has the ability to harness energy cleanly from nature and convert it into electricity and/or drinking water for the City [of Santa Monica].  http://www.landartgenerator.org/competition2016.html

The lecture is being co-sponsored by the Cal Poly Pomona Student Chapter of the American Society of Landscape Architects.

Toured LAX’s airfield with my LA301L studio on Monday 10/26 to see what we could see. Highlights include the Argo Ditch, sculptures by Ball+Nogales, and several A380 taking off! Argo Ditch (north side of the airfield)

As the gateway to the metropolis, LAX is a 3,425-acre void in the urban fabric. This studio will explore opportunities to address contemporary urban and ecological issues in the vast interstitial zones between the aviation and logistics hardscapes.

Projects in this 301L.02 will explore mapping landscape systems, visual variables and pattern generation, and use/event theory to support the final project.

Upon successful completion of this studio, students will gain the following design frameworks and methods:

END_OF_DOCUMENT_TOKEN_TO_BE_REPLACED

My entry for the Dry Futures Competition in the Pragmatic category. 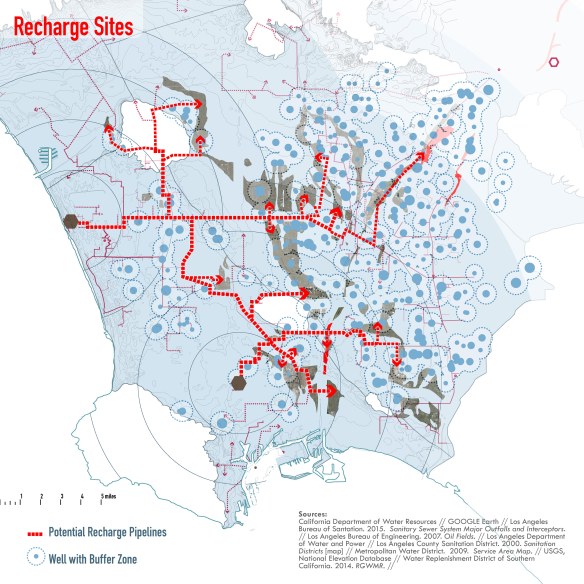 Recharge City evaluates pragmatic options for recharging the groundwater in Los Angeles County by recycling the 502 million gallons of water that is dumped by Hyperion Treatment Plant and the Joint Water Pollution Control Plant into the Pacific each day. This is enough water to quench the thirst of 5 1/2 million people.

To identify plausible sites for recharge, this project undertook a holistic mapping of the water infrastructure for the metropolis – ultimately collecting data from over 50 local, state, and federal agencies.

Recycling water is a necessity for Southern California to survive, so how can this massive infrastructure project to close the water loop create a better city for us to live in?

It’s been a very busy fall and winter above and beyond my usual teaching load at Cal Poly Pomona. Just got back from presenting at #CELA2015 on DisplayScapes and organizing a panel on DIY sensing in Landscape Architecture design studios (with Lucia Phinney, Allison Lassiter, and Brad Cantrell) this past week, and creating a new 200 square feet sequence of Aqueduct Futures maps and drawings. These are on display at After the Aqueduct (curated by Kim Stringfellow) at Los Angeles Contemporary Exhibitions through April 12, 2015. Excited to share some of the press (LATimes, KCET, and LAM) coverage of the exhibit!

Christopher Knight reviews After the Aqueduct in the LA TImes:

California is not in danger of running out of water in the next year or two, but the climate-change situation is going from bad to worse as we enter the fourth year of drought. At Los Angeles Contemporary Exhibitions, “After the Aqueduct” looks at one big piece of the state’s water puzzle.

Organized by artist Kim Stringfellow, the show includes works by half a dozen artists and designers that focus on the century-old hydraulic water conveyance system meandering more than 200 miles from the Sierra Nevada to Southern California.

Much of the display is documentary, such as a series of charts produced by Barry Lehrman and Cal Poly Pomona students – to date, more than 120 of them – who are mapping complicated land-use issues for the school’s Aqueduct Futures program. I would describe the charts as visually dry, although the pun threatens to distract from the seriousness of the task. END_OF_DOCUMENT_TOKEN_TO_BE_REPLACED

Cal Poly Pomona Landscape Architecture students with Prof. Barry Lehrman and Jonathan Linkus (exhibit co-designer) share how the Aqueduct Futures Project has changed their attitudes towards water and came to understand the impact of the Los Angeles Aqueduct to all of California.

In order of appearance:

Produced and Directed by:

This video is under a Creative Commons license: attribute & share alike. All other rights reserved.

A Series on The Future of California’s Water Supply

The Next Hundred Years of the Los Angeles Aqueduct

The water history of Los Angeles is marked by natural scarcity, abundance, and drought. This year’s 100th anniversary of the Los Angeles Aqueduct celebrates a reliable and plentiful water source to match an expansionary vision for the city. Yet local water predictability produced resource depletion and legal wrangling in the Owens Valley where the watershed feeds the Aqueduct. Now a project called “Aqueduct Futures” proposes a cooperative 21st century realignment among stakeholders to balance water consumption, watershed ecology, economics, and culture.

$40 general public, $30 Southern California Planning Congress members, $25 students with ID. On-site registration (checks only) is an additional $10 and not guaranteed. On-line registration for this event ends Friday the 14th at 5:00 p.m. Please register, select dinner option, and submit payment at :
www.socalplanningcongress.com
For further information contact Bob Fazio at (626) 765-4036 or at rjfazio@mac.com
This event is eligible for 1.5 hours of AICP Certificate Maintenance Self-Reporting Credit.