I’ve been reading lots of books in the emerging genre of future environmental/societal/economic scenarios. These books are both calls for action and roadmaps into the uncharted wilderness of tomorrow. It’s much to early to predict which path our society will follow, but I can safely make the case that there won’t be just one scenario in play, but that hyper-locality will create a mosaic of best to worst cases (in fact we already live in such a world). So here is an introduction to the best and the worst of what the future may hold for humanity.

Scenario planning isn’t that new, governments and business have been using this process for decades. The UN seems to excel at generating scenarios, with the IPCC and the Millennium Ecosystem Assessment laying out the foundations for most of the compelling environmental, population, economic, and energy futures. 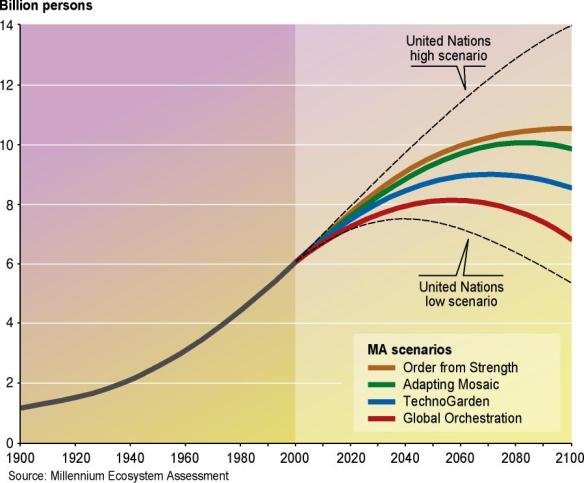 What is new from these books, is the emergence of both citizen led and government led local action plans under the rubric of ‘transition towns’ and ‘climate action plans’

There seems to be a general consensus that human civilization and the planet face some combination of the following four scenarios:

we don’t act (or act way too little, too late), and environmental problems generate more and more catastrophic impacts, and things get rather rough.

advanced alternative energy systems and policies save the day and our lives don’t have to change.

the soft landing where we create a new low energy civilization and live happily (sort of) ever after eating local foods and not traveling very far.

the crash where we don’t act and civilization end (except for a few small places) once oil becomes scarce.

A few other variations of the middle paths are:

I’ll be dedicating several posts about resilience and regeneration soon. So moving on:

Detroit is the poster child for the future of food production in cities that have lost population. Many cities around the world, like havana, are increasing their food production to accommodate other economic hardships.

these already exist in many places as the wealthy exclude the have-nots (except those hired as servants). peak-oil will exacerbate this phenomina and the increasingly isolated top 2% will be shielded from most impacts.

there doesn’t seem to be many folks that merge these scenarios. To take a quick stab at it, it looks like peak oil might limit atmospheric CO2 to 385 – 400 ppm depending on how quick oil prices spike. The good news is that this eliminates the worst case scenario in the short term. Perhaps this even means that the global destruction of biodiversity will stop too as resource extraction comes will likely halt when oil prices spike. But there is likely going to be localized destruction as cities empty out into adjacent hinterlands and previously open space is turned agricultural to feel local populations (where ever possible).

Some of the books I’ve been reading on this topic are:

Its also worth sharing a little methodology – so here’s how the Federal Highway Administration‘s bureaucratic process for transportation scenarios:

On closing, a few thoughts on the possible ends of the world from open the future.com. On the chart below, the worst case  that I can imagine occurring is perhaps a 1 and most of the scenarios listed in this post are closer to a zero ..

2 thoughts on “Intro to future scenarios & the post-carbon wilderness”