Please accept my apology for not posting as often as I (and you, my readers) would have liked over the past few months, as it’s been a (very) busy spring, and turning into an even busier summer. The focus of much of my extracurricular effort has been landing a tenure-track spot, so I’m very pleased to announce that I will be joining the Landscape Architecture Faculty at Cal Poly Pomona in the fall!

Pomona has always been one of my top choices for their long standing leadership in environmental/sustainable design, but there were a few days where it looked like I might be heading to NYC instead of Los Angeles (but that’s a story that I rather not share to avoid hurting the other school). So this summer is all about packing up, jettisoning unused stuff,  tying up loose ends in Minnesota (including a bunch of overdue posts), and heading back to California. As I settle into the world of publish or perish academia, I’ll be sharing more about teaching and my writings when time permits. Hope to still keep the random observations about infrastructure, landscape, art, cities, and sustainability  that generate most of the new visitors to Infrascape Design.

Other activities (soon to have posts of their own)  from the first half of 2011 that have reduced my posting to Infrascape to the bare minimum includes developing three new courses, writing a grant proposal to establish a research coordination network for urban heat island mitigation (stay tuned for news if we get funded), submitting  two abstracts to the AASHE conference (both were accepted!) and writing another book review for Landscape Journal (also to be shared soon).

The academic job search ended up being a cathartic and very revelatory process as it forced refining my interests and methodologies that are the foundation of my concept of infrascape into succinct statements. Through numerable iterations as I sent out a dozen-and-a-half applications, I had the opportunity to craft a Research Statement, a Teaching Statement, and a ‘teaching talk’ [see below]. Variations of this teaching talk got presented in 4 skype interviews,  in 2 in-person interviews, and as a ‘teaching portfolio’ sent to most of the search committees. All of these iterations that have deepened my understanding of who I am, and sharpened what I hope to accomplish through research, teaching, and service at Cal Poly.

For Fall Quarter at Pomona, it looks like I’ll be leading a section of the 301 studio, and co-teaching the 510 studio. Stay tuned for details of new courses in development and the adventures in selecting studio sites in the urban wilderness of Los Angeles and Southern California.

A teaching talk (for those of you outside of academia) is a lecture where you present your current research and creative works, examples of coursework produced by your students, and articulate your future aspirations to demonstrates your potential to be a strong scholar. The tough part is finding a common narrative  to tie together the complex tangents and threads of interests that one accumulates in life. I’m sure there are many variations possible, but I’ve only recently seen two other folks present (as part of their interviews as the UMN last spring), and few seem to be shared on the internet.

Here is  my teaching talk at Cal Poly (the talk was 30 minutes with 20+ minutes of questions). I’m grateful to all my UMN student’s who’ve shared their work. 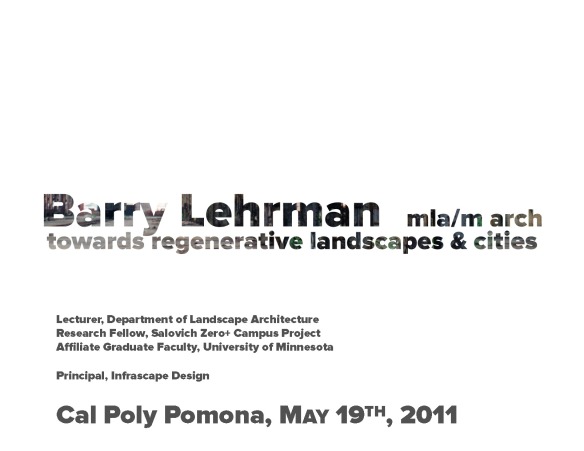 As a landscape architect, I cringe when I see massive engineering and infrastructure projects that demonstrate no sensitivity to the site, ecology, or culture. Solar power and renewable energy projects are no exception. There needs to be a better way to deploy large scale solar energy projects that reduce their cultural and ecological impact on the landscape.

There is an interesting etymology emerging for solar power projects that have agricultural and ecological imagery. Solar farms, solar groves, solar forest, solar trees, solar ranch, and bright fields, all evoke sylvan or pastoral landscapes while the reality is anything but that in most cases. If we play this game – solar orchards, solar gardens, solar bosques, solar glens, solar dell, solar pastures, solar glades, solar forest, solar plantation, solar jungles, solar meadows, solar pastures, solar shrubs, solar trees, and perhaps solar topiaries – may all soon to join the lexicon of solar projects for better or worse.

Compared to most other forms of energy, solar farms have one of the lightest impact no mater how you slice it – EROEI, LCA, area per watt, co2e/watt or btu, et cetera. Robert Bryce got the math wrong by ignoring the baseline of fossil fuel impacts in his June NYTimes Op-Ed. Yes – solar and wind farms require large areas (if not build in urban areas), but their footprints are minimal compared to fossil fuels which require equally large areas that are usually hidden from public view – from the mines/oil fields, to processing plants/refineries, pipelines, tank farms, and then there is the area contaminated downwind and down stream that Bryce is paid to ignore. Okay, there are toxic byproducts of both thin film and silicon cell production, but again, these are significantly lower per watt then most other forms of energy production.

Yes, solar energy development may require removal of vegetation over tens of square miles (which impacts the ability to keep the mirrors clean), digging the point foundations for the heliostats (see image below) & turbines, and depletion of groundwater to keep the panels/mirrors clean. But compared to the other renewable energy systems, solar’s environmental impacts are an order of magnitude less then wind farms which sprawl over much more land, mix the atmosphere, require massive foundations and structures, and create noise problems to name just a few issues; or are several orders of magnitudes less then hydropower and most biofuels. Energy sprawl is real, but don’t blame wind or solar.

Still, this small footprint  isn’t good enough, but now there is hope for integrating photovoltaics into our cultural landscape.

END_OF_DOCUMENT_TOKEN_TO_BE_REPLACED

One year ago, there was survey by Pew Research and the Smithsonian that explored what Americans think life would be like in the year 2050. 53% believe ordinary folks will travel in space, and 74% think that most of our energy won’t come from fossil fuels. Now GOOD and Column Five Media have turned the survey into an infographic.