Playgrounds have lost a sense of imagination since the lawyers got involved, resulting in boredom and lack of use (plus their style can be best described as a pastiche mixed together by a committee). There is a burgeoning renaissance of high-design returning to playgrounds (such as recent parks by Van Valkenburg in NYC or the ‘Rollercoaster Walkway’ in Germany – though these seem more for adults than kids).

Jungle Gyms date back to 1923 and were a feature of progressive k-12 education. Now most risky play activities has been regulated out of existence for younger children – so there is a documented loss of self-assurance and an increased fear of heights. Risky play is essential for development per  Dr. Sandseter:

“Climbing equipment needs to be high enough, or else it will be too boring in the long run,” Dr. Sandseter said. “Children approach thrills and risks in a progressive manner, and very few children would try to climb to the highest point for the first time they climb. The best thing is to let children encounter these challenges from an early age, and they will then progressively learn to master them through their play over the years.”

… “There is no clear evidence that playground safety measures have lowered the average risk on playgrounds,” said David Ball, a professor of risk management at Middlesex University in London. He noted that the risk of some injuries, like long fractures of the arm, actually increased after the introduction of softer surfaces on playgrounds in Britain and Australia.

“This sounds counterintuitive, but it shouldn’t, because it is a common phenomenon,” Dr. Ball said. “If children and parents believe they are in an environment which is safer than it actually is, they will take more risks. An argument against softer surfacing is that children think it is safe, but because they don’t understand its properties, they overrate its performance.” – nytimes

As the father of a 3 1/2 y.o., I wish he could experience the playgrounds of the ’70s that formed the core of my childhood. I’m willing to trade a few bumps, bruises, and perhaps a broken bone or two to help build his character and physical development – especially since most of these play structures required imagination to use.  The rest of this post is a few of the cool play structures worthy of celebration and having in your neighborhood!

[anybody know who designed these pre-cast concrete pieces?]

(Noguchi even got in the playground design business via pruned) 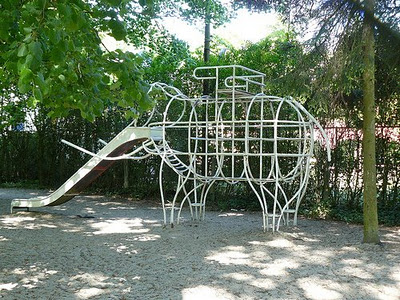 So what is your favorite playground memory?

6 thoughts on “Jungle Gyms of the Past”