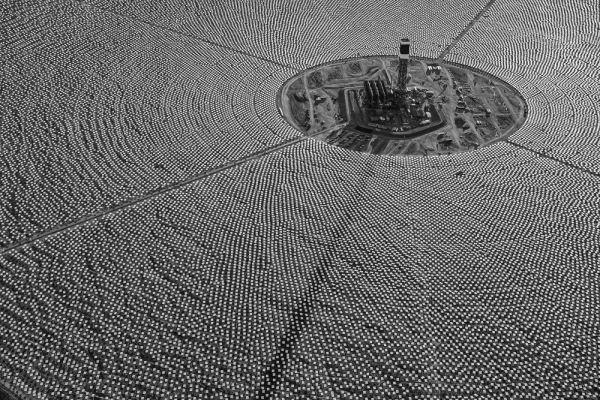 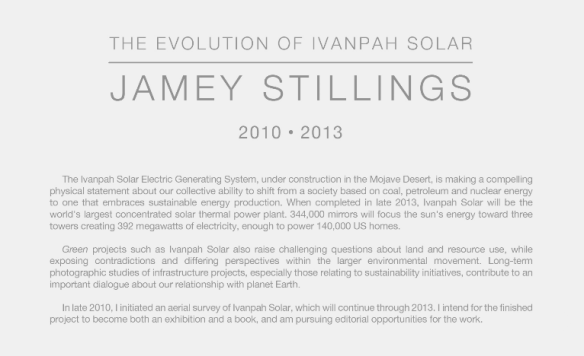 Some of his photos evoking the Nazca lines or Michael Heizer’s Complex – this is quite the documentation of the infrastructural sublime. 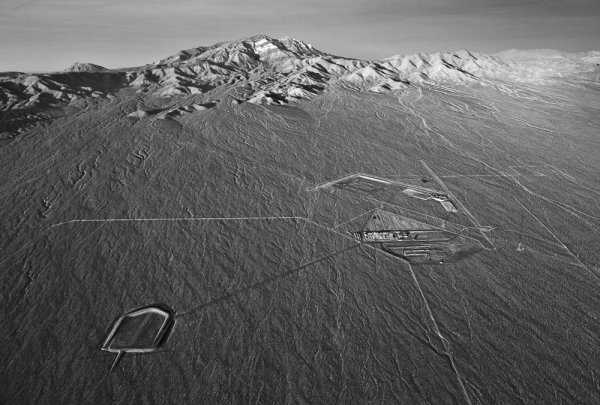 View north of Ivanpah Solar showing all three solar fields with heliostat installation complete in Solar Field One in the foreground. October 27, 2012.

There is a remarkable amount of intact vegetation beneath the heliostats – making me wonder if it is possible to design a low-impact solar farm?

Installed heliostats in Solar Field One and adjacent section of undisturbed desert terrain of the site’s alluvial fan. January 6, 2012.

Workers install a heliostat on a pylon in Solar Field One. June 4, 2012.

“But we have to kill the trees to understand how they die. Not a lot of them, just a few.”  “We need to understand the mechanistic side if we’re going to model the effects of climate on a large scale, we need to understand why and where trees die. When we can do that accurately, we’ll have a shot at knowing the broader effects.“– Nate McDowell

The experiments at Sevilleta focus on Pinon-Juniper woodlands of New Mexico and are subject to several experiments by researchers from Los Alamos National Laboratory (U.S. Department of Energy, Office of Science’s Program for Ecosystem Research).

To observe the impact of higher temperatures, 18 trees are wrapped in 15′ tall plastic cylinders with heaters that keeps the temperature about 7 degrees warmer than ambient conditions to simulate the predicted climate of 2100.

END_OF_DOCUMENT_TOKEN_TO_BE_REPLACED

The Bureau of Reclamation is proposing a massive uphill diversion from the Missouri River to Denver. The Missouri River Reuse Project [pdf] would provide 600,000 Acre-Feet of water to the Front Range to as an alternative to desiccating the Upper Colorado even more.  This evokes the ghost of the continental engineering of North American Water and Power Alliance (1964) or towing icebergs from Alaska to provide water to Los Angeles. 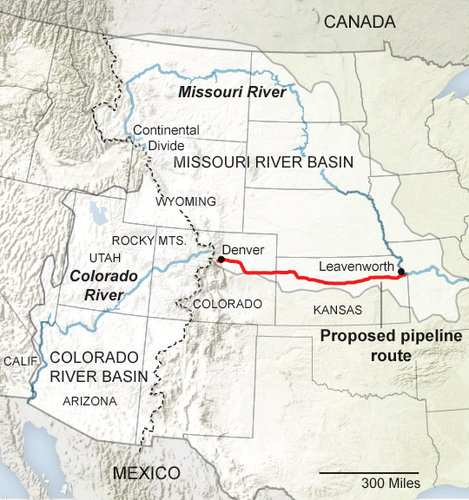 “The idea of constructing conveyances to move water resources between other basins and the Colorado has been raised before and was once again submitted as an idea in this process,” Bureau of Reclamation public affairs chief Dan DuBray said in a statement. “Any proposal will be evaluated for feasibility, broad support and realistic funding potential before further consideration would be given.” – The Denver Post

Just a short peak at my backyard yesterday morning, when a flock of feral parrots swarmed my (not-quite-ripe) persimmon tree for breakfast and made quite a ruckus. 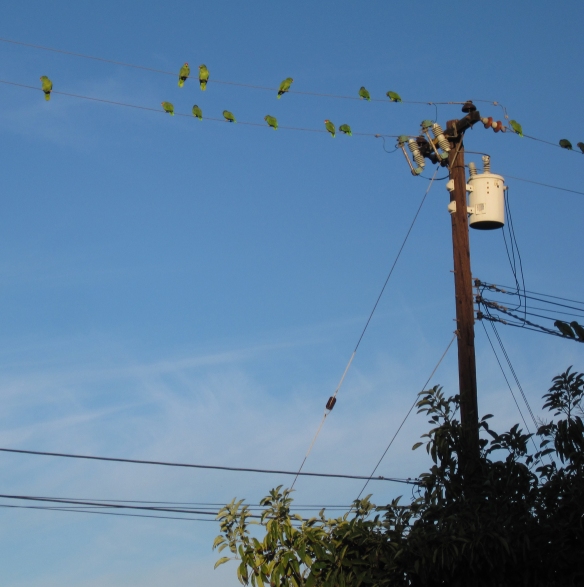 This video was an excuse to start learning Adobe Premiere and represents about 1 hour of effort to get this rough cut. The camera was our little Canon PowerShot SD940 (my DSLR and Sony A1U were at my office), so pardon the shake and lack of focus…