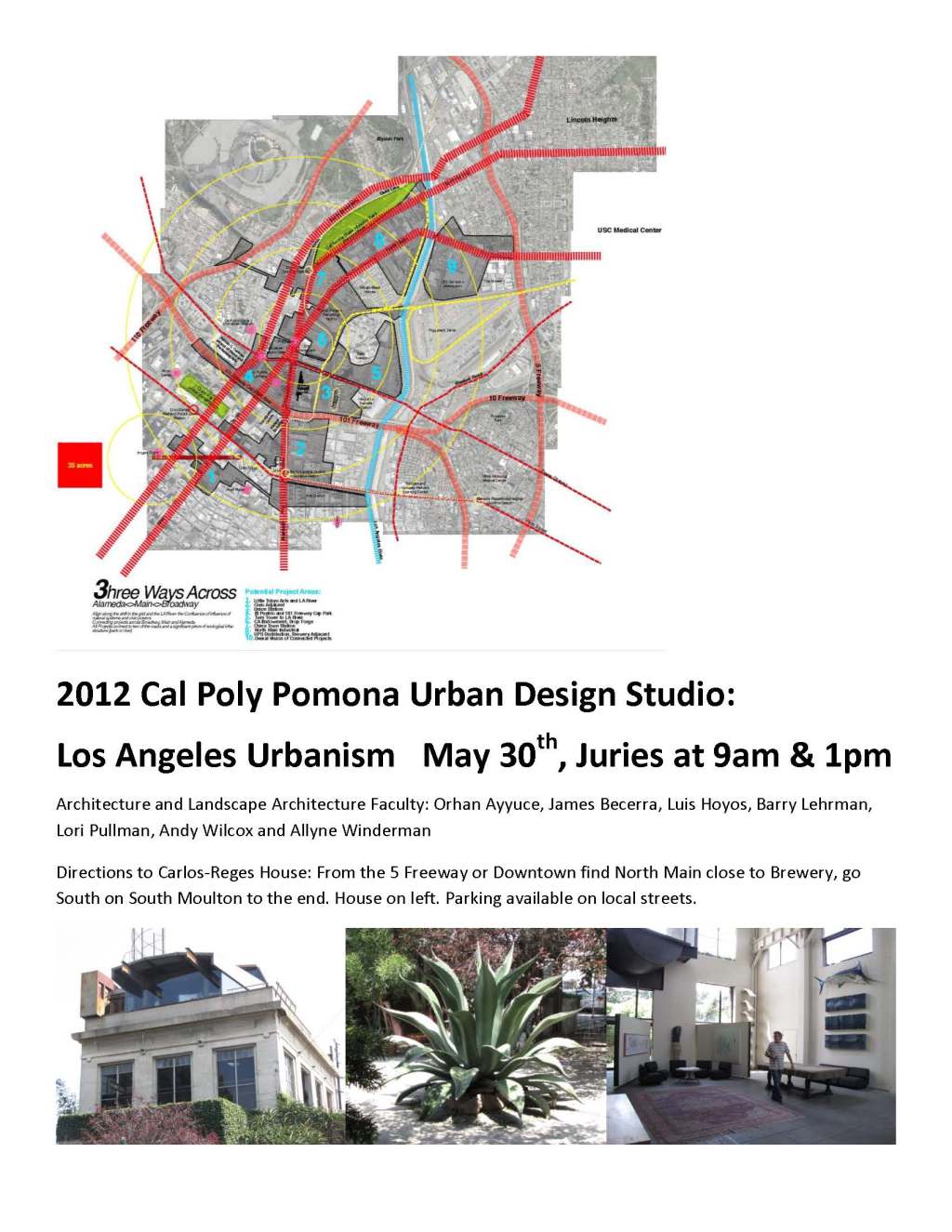 The next built environment today

Ed Mazria is a hero of mine, and I always try to catch his talks when he swings through. I’ve been wondering when there will be a ‘Landscape 2030’ or ‘Urbanism 2030’ to augment his work with Architecture 2030. So I’ll find out what his latest thinking is today.

10:16 – intro by Prof. Pablo Laroche. [the images will be re-arranged as the talk unfolds]

EM -you are about to be the most important group on the planet. What design is, thanks to a lecture by Louis Kahn at Pratt in 1959. In the lecture Kahn drew different things with both hands – wrote ‘silence’ to ‘light’ -“at the threshold of this crossing is Design (a calling on nature).” space time and the environment in the 1950s. We’ve tripled our consumption of fossil fuels since the 1950s, and taken silence out of the equation, to focus on space and form.

Marrakesh aerial photo – showing pre-industrial city – the urban fabric that had to work. dry climate that cools down – so buildings capture the cool air that settles into the fabric – pre-vehicle streets – the buildings shade each other. the masonry is a heat sink. all the buildings are square donuts – floor plates are narrow to allow daylighting. courtyards are intensely planted [image of courtyard]

[Vienna aerial photo] – streets are wide to allow sun light, but buildings are similar pattern to Marrakesh – no planting in courtyards to allow light and heat to get into buildings. narrow high windows – the longer the light throw/deeper the floor plates.  [circles church on the photo]

CIAM 1928 – 1959 reacting to squalid housing conditions around Europe, coal was still major fuel in cities. Athens Charter (modernism is the enemy of sustainability!)

The NYtimes explores the paths that Paolo Soleri’s masterpiece may take now that he has retired. Will Arcosanti become a stagnant museum like Taliesin West, a vibrant educational foundation that furthers his work and philosophy, or will it slowly crumble back into the desert? Intended to be a self-sufficient an Eco-City, Arcosanti lacks the basic systems that are standard sustainability practices today (and even were typical 40 years ago), no insulation, no water harvesting or recycling, just two greenhouses to grow their own food, no renewable energy systems, and high performance window. I’d even argue that the choice of concrete is not the most sustainable material to have used – yes, it has great thermal mass that is important in the desert, but has a huge carbon footprint. Perhaps history will see Solari as a visionary that lacked the technical depth (or knowledge) to fully realize his dreams (a charge that his peers like Malcolm Wells avoid), just a paper architect who built full-scale models.

At least the Arconauts have their bells.

The NYtimes has a slideshow here. 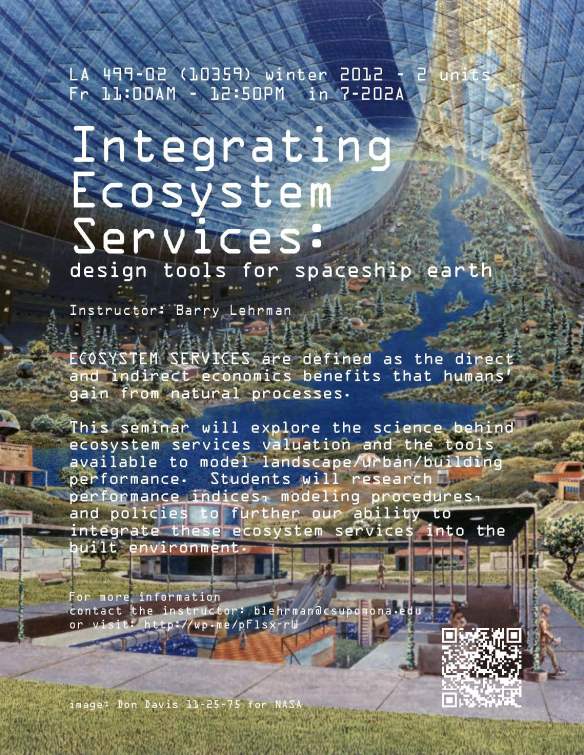 END_OF_DOCUMENT_TOKEN_TO_BE_REPLACED

I’m heading to Pittsburgh tomorrow for Association for the Advancement of Sustainability in Higher Education conference to present a poster [pdf] [visit us at board #121 in the expo hall Monday 4-6] for the Zero+ Campus Project and to support the fabulous Elizabeth Turner who will be presenting the student engagement aspects of the Z+ project [Wednesday, room 403 @8:20]. At the conference, I’m going to participate in the Sustainability Curriculum Convocation too. More posts to follow on the conference and Pittsburgh.

Gotta thank LA department at Cal Poly for enabling my trip, so I’m representing them too with some swag to recruit grad students and possible faculty. 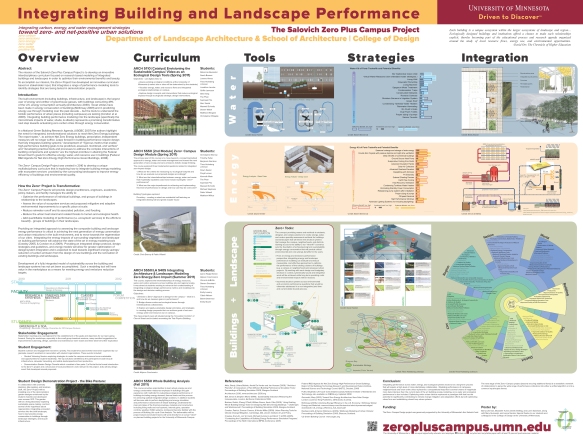 END_OF_DOCUMENT_TOKEN_TO_BE_REPLACED

I’ve been holding back on this post since mid-September until all the stars were in alignment –  we now have a website and have issued the press release, so here is my BIG news for the Fall:

I’m really excited to share that the Department of Landscape Architecture and the School of Architecture at the University of Minnesota have been awarded $255,545 to develop a new curriculum focused on teaching on the integration of energy and environmental modeling of campuses.

The Salovich Zero+ Campus Design Project is investigating how to integrate energy and environmental performance modeling, using the University of Minnesota’s Twin Cities Campus as our laboratory. The project is a collaboration between the University’s College of Design’s Department of Landscape Architecture and School of Architecture, in association with Capital Planning & Project Management, Facilities Management, and the Institute on the Environment. Funding is provided by the Ann Salovich Fund.

Modeling the energy performance of buildings is well established and integrated into the design of all new buildings at the University of Minnesota per state law. Performance modeling of environmental factors (storm water, biodiversity, shade and ground cover, energy use in the landscape, and other criteria) are not usually considered or integrated into the creation of the building energy models. These environmental factors play a significant role in the actualized performance of the campus, and also contribute to the beauty of place. The Salovich Zero+ Campus Project will explore how to integrate the modeling of buildings into the campus landscape, and to enhance the performance of the landscape.

The project team is lead by Lance Neckar – Chair, Department of Landscape Architecture, and Mary Guzowski – Director of Graduate Studies, School of Architecture/Director of  MS Sustainable Design program, while Loren Abraham and myself are the research fellows who will do most of the work and teach the classes. Our graduate research assistants (for 2010/2011) include Derek Schilling (MLA candidate), Elizabeth Turner (M.Arch/MS candidate), and Laurie McGinley (M.Arch candidate). 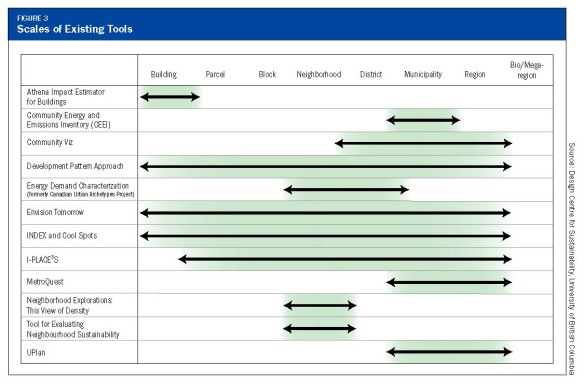 END_OF_DOCUMENT_TOKEN_TO_BE_REPLACED

After several years of marketing hype, Masdar gets visited by the NYTimes architecture critic, Nicholai Ouroussoff. What is interesting about his review, is his analysis of the social impacts (and benefits) of living in Foster’s ‘zero-carbon city’ may just be available to the wealthy and invited foreigners.

What Masdar really represents, in fact, is the crystallization of another global phenomenon: the growing division of the world into refined, high-end enclaves and vast formless ghettos where issues like sustainability have little immediate relevance.

…Masdar is the culmination of this trend: a self-sufficient society, lifted on a pedestal and outside the reach of most of the world’s citizens.

I’m also curious to see if the Personal Rapid transit system lives up to it’s promise. After several decades of not meeting expectations, will these automated vehicles prove viable or cost effective?

Check out the slideshow & the infographic on how Masdar ‘works’.